During China’s October National Day, news of Merck’s investigational oral pill (Molnupiravir) for treating Covid-19 was received with great excitement and many questions: is a special drug finally born? Will the treatment of Covid-19 be similar to that for the common cold? Will the new drug become the panacea in ending the Covid-19 pandemic?

However, shortly thereafter, reports from India indicated that the drug has “no significant efficacy” for patients with moderate Covid-19 symptoms, making it difficult at this time to determine the efficacy of Molnupiravir for treating Covid-19. We at Evergreen are not surprised; as we understand it, according to the 10 technical pathways of vaccine development and 10 EUA products approved by the FDA, every aspect of the fight against SARS-CoV-2 has been a combination effort.

Currently, the treatment for Covid-19 has become a strategic issue for advanced economies, and Evergreen’s new anti-inflammatory drug, EG-009A, is making a breakthrough via a six-point development strategy. In this regard, Dr. Li Changqing, CMO of Evergreen, gave an interview in which he discussed changes effected by the new drug Molnupiravir, while offering his thoughts and in-depth analysis on the “combination treatment for Covid-19”.

The efficacy of Molnupiravir

While Molnupiravir’s target group and timing of drug administration still require further study, what is certain is that its development marks a major advancement in humanity’s fight against the new coronavirus, SARS-CoV-2. An analysis of Phase III trials in several countries found satisfactory efficacy in 775 patients with mild to moderate Covid-19 symptoms, who were sick for less than 5 days, and tested positive for coronavirus PCR, who took Molnupiravir in a randomized trial, with only 7.3% hospitalization or mortality rate on day 29.

The latest clinical results from India suggest that Molnupiravir may not be very effective in moderate Covid-19 cases. The Indian Drug Regulatory Agency disclosed that according to interim clinical trial data submitted by two Indian drugmakers, Aurobindo and MSN, Molnupiravir did not show “significant efficacy” in patients with moderate Covid-19 symptoms, and had asked to end the clinical trials, despite the drug having shown efficacy in patients with mild Covid-19 symptoms.

To assess the efficacy of Molnupiravir, a different measurement can be used — that of NNT, which represents the average “number of patients who need to be treated” to prevent one additional bad outcome. NNT is a quantitative analysis tool commonly used to compare the pros and cons, or the effectiveness, of a drug or treatment. As a rule of thumb, NNT of 5 or less is usually considered acceptable; in some cases, even numbers below 10 can be marginally acceptable. Applying the NNT measure for Molnupiravir compared to placebo, the number is 15, which means that for every additional patient who benefits from the drug, 15 patients need to be treated. Hence, Molnupiravir does not outperform the benefits of neutralizing antibodies, which has an NNT of 7.6.

Mechanism and advantages of Molnupiravir

One of the reasons for the success of Molnupiravir is its interference in the virus’ genetic coding mechanism, thus affecting viral replication. Molnupiravir is metabolized in the body as ribonucleoside analogues, where it pretends to be the virus, and uses RNA polymerase to cause “misidentification” in the creation of viral enzymes, leading to errors in viral RNA replication. This load of deleterious mutations leads to a condition of “lethal mutagenesis”, where the virus cannot assemble itself, thus inhibiting viral growth and replication. There are few antiviral drugs that can “kill” the virus, so it is remarkable that Molnupiravir has shown efficacy in suppressing respiratory viruses and stopping the progression of SARS-CoV-2.

Another of Molnupiravir’s big advantages is that it is an oral medication. For patients with mild disease who do not need injectable medications at a hospital, Molnupiravir oral pill is convenient, accessible, available in larger quantities, and also less expensive ($700 for a five-day treatment, or about a-third of monoclonal antibody therapy). Merck has already applied for emergency FDA authorization for its Molnupiravir oral pill.

Potential side effects of Molnupiravir

Since the mechanism of Molnupiravir is theoretically to cause lethal mutations in the SARS-CoV-2 virus, exposure to the drug may also cause mutations in host DNA during the process of host DNA replication. Merck specifically placed restrictions on clinical trials, requiring patients not have sex or use contraception during the experimental period, warning of the possibility of causing teratogenesis, congenital defects, or carcinogenicity, which cannot be completely ruled out. Therefore, potential side-effects of Molnupiravir use need to be further investigated. Although Merck stated that it found no genetic variants in tested animals, it remains to be seen whether Molnupiravir will have a mutagenic effect on mammalian cells, causing tumors or birth defects. 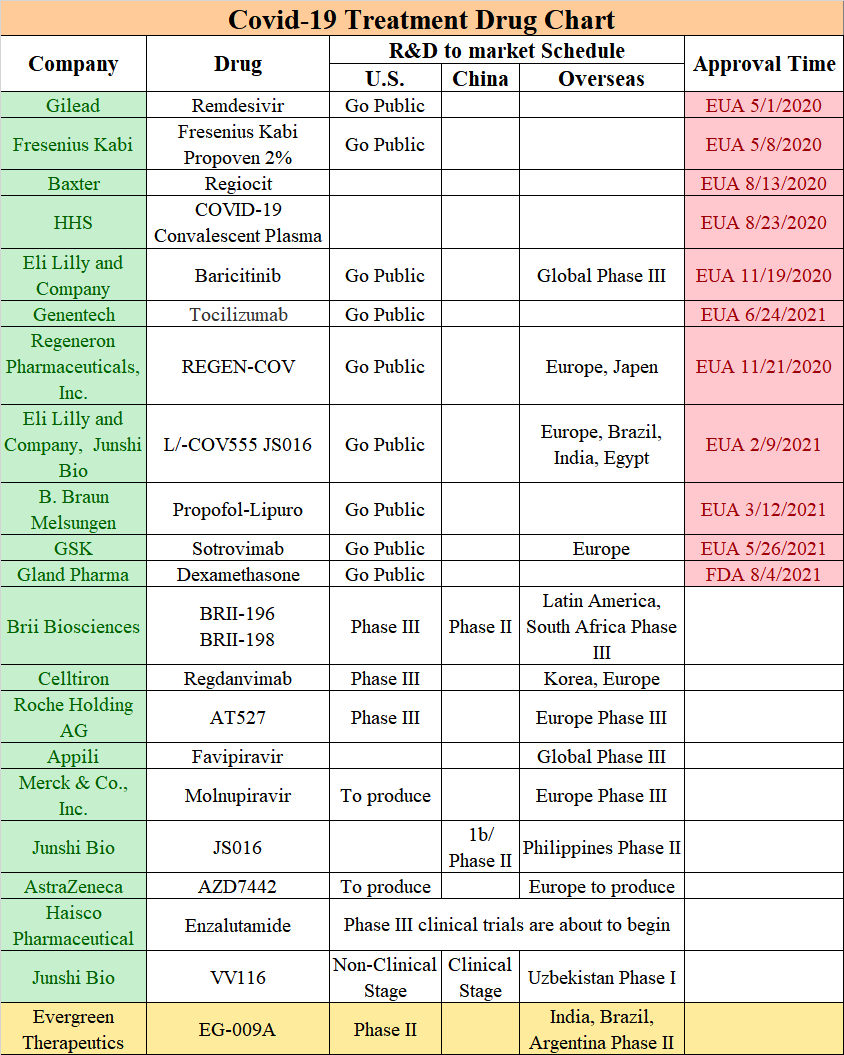 National importance of the treatment against Covid-19

Recently, China’s relevant national ministries and commissions held a symposium focusing on the “progress of research and development of Covid-19 treatment drugs”, in which eight companies nationwide were selected to participate. Evergreen was honored to be one of the invited, and Dr. Du Tao, chairman of the board, attended as representative. Although Evergreen is an emerging biopharmaceutical company established only two years ago, the company's rapid progress in the field of Covid-19 treatment has received immense national attention.

A study conducted by Pfizer, a U.S. drug company, found that six months after completing a Covid-19 vaccination, protection diminishes from 88% to 47%, but the preventative effect on hospitalization and mortality still reaches 90%. As China, the United States, and Europe enters the “post-vaccine era”, vaccination coverage is exceeding the herd immunity target of 65%-70%. However, this does not mean there will be no future infections. On the contrary, multiple data show that as SARS-CoV-2 mutates, the role of vaccines is diminishing, while breakthrough infections after vaccination emerges as a growing concern.

Understanding and anticipating the impact of breakthrough infections post vaccination is critical to China’s national interest with regard to estimating and managing the consumption of medical resources. Where as in the US, the number of ICU beds per 100,000 people is 35, in China it is about 3. In terms of cost, a patient in the US entering the ICU will incur about $320,000, while general in-patient care is $75,000. If we were to estimate breakthrough infection rates and associated medical costs for China using the above data, the figures would be daunting. So it must be noted that once a major breakthrough infection occurs in China, the pressure for treatment is immense. New Covid-19 treatment drugs are therefore critical for the stability of society at large, and the Chinese government attaches great importance to them by including them in the national strategy.

Evergreen’s contribution to the fight against Covid-19

From a therapeutic standpoint, none of the currently approved drugs, including those with US EUA, treats lung inflammation caused by Covid-19, with Evergreen’s treatment as the only one to target these indications. Among globally developed therapeutic technologies, Evergreen embarked on the anti-inflammatory route and is adopting a new anti-inflammatory mechanism. In terms of development strategy, Evergreen has chosen to develop in a "highly regulated" environment, benchmarked against the higher regulatory standards of the US, Europe, and Japan. Evergreen believes that only drugs developed under strict regulatory standards have the potential to excel in future patient penetration.

EG-009A is an anti-inflammatory drug that uses a new mechanism to treat the cytokine storm caused by a Covid-19 infection. It is mainly to be administered in patients with moderate to severe Covid-19 symptoms to reduce mortality.

While antibodies are key to fighting virus infections, they occasionally “lose control" and attack organs and tissues. In the mid-stage of a SARS-CoV-2 infection, the virus has generally stopped replicating, but in patients with moderate to severe symptoms, an over active immune response may cause a “cytokine storm” (CRS) that harms the patient. EG-009A can use trans-inhibition, in which the activated monomeric GR binds to other transcription factors such as NF-κB and AP-1 to prevent the expression of pro-inflammatory genes, thereby suppressing a cytokine storm through multi-targeted inhibition of excessive immune response, such as reducing tumor necrosis factor, IL-6, IL-1β and G-CSF, and other factors to treat moderate to severe Covid-19 symptoms.

EG-009A is a selective glucocorticoid receptor modulator. Through screening of 1,040 natural products and FDA-approved drugs, Evergreen determined that EG-009A selectively regulates clinically significant GR target genes, including ENaC (epithelial sodium ion channel, which plays an important role in epithelial cell fluid balance), FKBP5 (related to decrease of GR sensitivity and increase of resistance), and GILZ (anti-inflammatory or tumorigenesis). This gives EG-009A its excellent anti-inflammatory properties, while avoiding secondary infections, femoral head necrosis and other side effects, and can be used for long-term treatment.

Features and indications of EG-009A

The main beneficiaries of EG-009A are patients with moderate to severe Covid-19 symptoms, who often experience pneumonia (infection that inflames the lungs' air sacs). Cases of pneumonia caused by the new coronavirus is high, reaching 50% to 80% of those infected. However, among the 10 EUAs approved by the FDA, there is no drug available for the treatment of pneumonia. This presents an entry point for Evergreen’s EG-009A drug.

Evergreen had two communication meetings with the FDA before reaching a 5-indicator assessment indicative of lung failure as endpoints for EG-009A treatment. Namely, the indicators are: requiring a ventilator, requiring high-flow oxygen, using a non-invasive positive pressure ventilator, using an extracorporeal membrane oxygenation machine (ECMO), and other typical clinical symptoms of lung failure.

EG-009A can be administered in two ways: oral and intramuscular injection, each with its own characteristics, and can be used separately or in combination. For example, a patient can be given a quick-acting injection to induce a rapid rise in drug concentration in the blood, then follow up with oral agent, which is more convenient for patients to administer themselves, to maintain drug concentration.

Evergreen chose a strategy of developing drugs within "highly regulated" markets based on several considerations. First, with regard to preventive vaccines, the WHO access committee differentiates between “high-regulated” and “low-regulated” countries in terms of length of review cycles. For example, a vaccine approved by Pfizer in the United States was approved by the WHO in a week. For China's vaccines, it took Sinopharm and Sinovac five to six months to get the WHO’s certification. So this is first and foremost a matter of speed.

Second, and more importantly, the WHO currently does not have a mature mutual recognition mechanism for therapeutic drugs, and lacks sufficient influence on the approval of these drugs. With regard to the latter, the WHO actually lags the drug regulatory authorities in many countries. In comparison, mutual recognition of therapeutic drugs is relatively feasible between and among countries, especially for products approved in “highly regulated” regions. For example, a drug approved in both the United States and Europe will face a very simple registration and application process in Hong Kong, and can be available on the market within a few weeks.

In addition, Evergreen has five former FDA review officers who are immensely knowledgeable about regulations and offer invaluable guidance for the company’s the “high regulation” route, thus foregoing WHO access and directly seeking FDA or EUA approval. Hence, the “high regulation” route provides many advantages to Evergreen and allows it to avoid some uncertainties while accelerating globalization of its business.

Overall, the development direction of Evergreen’s Covid-19 treatment drug, EG-009A, is in line with the national strategy as well as the company’s goal of achieving clinical value. Evergreen will implement research and development, and seek advancement in the principle of “combination treatment”, in the hope of making breakthroughs for more effective treatments in the global prevention and control of the new coronavirus pandemic.

None What is the secret of Evergreen Therapeutics? Only two years after the Company’s founding, it is directly challenging current "standard of care” treatments for advanced endometrial cancer
Latest News 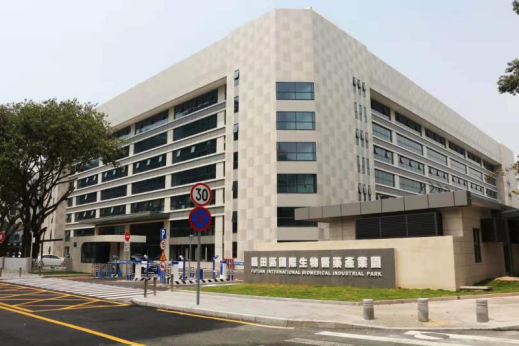 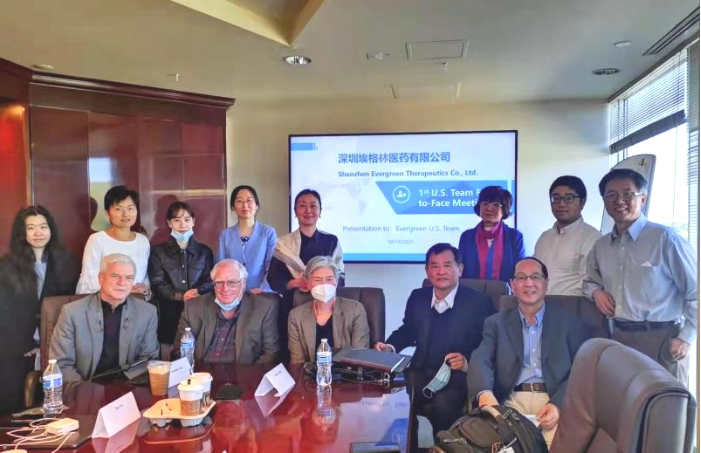 The First Offline Meeting of Evergreen USA Team was Held to Review Achievements and Look into the Future
Oct,2021 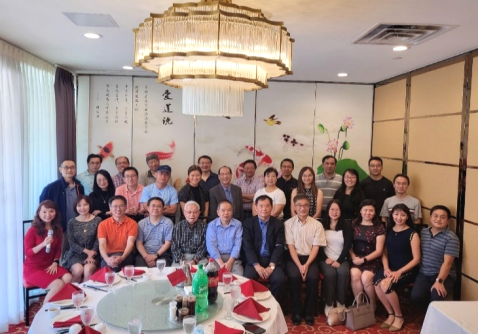